I did feel you..
Your look..your smell..your touch.your skin..every word......real or not I did feel,every second of it..every lie..and every promise...every disappointment that hurt like hell...every forgiveness and every promise that it won't happen again and it did..every time..and the pain only grew because of your constant promise that you would  change...and I believed in you..but can I now?how can I trust you?how can I believe what you say?it feels like torture.
Publicat de Unknown la 10:44 Niciun comentariu:

There's no story line here...only a few thoughts that have gathered on a piece of paper..meaningless..pointless thoughts..
I have come to realize that being lost was the best thing that could ever happen..Facing the dark was the  best  thing that could ever happen..We need to grow..to become a better version..to learn that life is not always fair..that most things don't happen the way you expect them to...that sometimes your best friends hate you and envy you for no reason..You need to understand betrayal in its worst form..That nothing lasts forever..And all you can do is set some boundaries..burn some bridges and move on..Life doesn't wait for you and your heartbreak  and in order to heal a wound you need to stop touching it..you need some quiet..away from the fuss..away from the drama and the people who creat it... 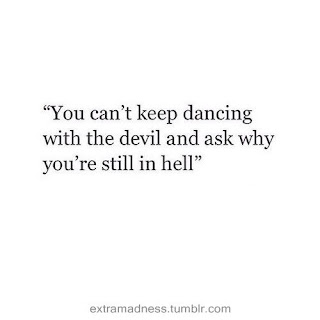 I don't even know how to begin...It's  been so much..like far too much..And I haven't been able to put the piesces together..I loved someone  who didn't love me back and I hurt someone who did  love me because I was too  broken to feel anything....And now that it's all over i can finally see the big picture of everything...or at least I pretend to see it bcause everything is so fucked up...I have lost my ability to feel because I did feel too much...It's a blessing and a curse..And I can't be honest..not even in my writings..I really need to see the road that is in front of me and I need to stop looking back to  memory lane cause what is done is done...You can't go back..you can't change what you did and who you were...I feel that I really need to forgive myself for being naive...for trusting too much..for seeing only the good in people.I really need to move on and forget about you because I deserve more..
Publicat de Unknown la 09:44 Niciun comentariu:

I haven't been able to write..sleep..talk...remember..for a long time now..
I feel paralyzed..I feel numb..and it feels great.
'cause for the first time I feel nothing
'cause I couldn't allow myself  to fall apart again.
I am paralyzed with regret...
That night you  anaesthetised me with your lips , touch,hands, smell, look.Emptiness
Since that night I wasn't able to breathe...I still feel your hands touching my skin in a way that no  one has  ever had..
And your greenish eyes watched me in such a vicious way that I recall everytime I close my eyes.
I watched you sleep and believe me , you looked so purely innocent and I just kept imagining who could  have hurt you in the past...who turned  you into this heartless person that you are today...
And because I was in pain myself instead of making you whole again I broke you into a thousand more little pieces .The truth is I only thought of you as being just a cure for me and I never thought that I would destroy both of us in the process.
I wish I loved you better.
Publicat de Unknown la 09:50 Niciun comentariu:

All good things come to an end.

I can't relate but I do miss you..more than yesteday and less than tomorrow..It's like an epiphany..why do people cheat, steal and lie?Why do people hurt each other?Just be true to who you are..'cause if you can't be that..I don't know what you could be.Just because somone hurt you in the past that doesn't mean you have to rip out souls only because you don't know who you are or what you feel.
Publicat de Unknown la 23:55 Niciun comentariu:

He managed to remember every line from each curve ,the way he used his fingers to play the music of eternity between her ribs..every space, every line,just like a well defined map ,such delight!
She managed to remember his husky voice,the bitter sweet vocals that made her tramble like in  the most terrifying winters, his smooth touch that  made her melt and tremble in the same time ,his lips tasted like tobacco,maybe that's why she started smooking ,to feel his presence even when he was not there..
How foolish!He made her  feel heaven and hell all at once ,He gave her something to remember, something to feel ,something she hadn't experienced before, it was magic,a magic that was so unreal,she became an addict.An addict of his touch, smell,presence.
But after a while her heaven drifted away..That's when everything started..
Eternity lasted for  a second and it was not enough..Not enough and that's when she realized that he was just the devil disguised and she was just too much for him..
Publicat de Unknown la 13:18 Niciun comentariu:

Empty
That is just a familiar feeling..
Just like a void..that cannot be filled..
Not with words ,not with promises, not with memories.
Words and promises that meant nothing
Memories that were mostly lies..
I was begining to ask myself why do people lie so often?
Do they just sound better?
Is it the thrill that someone is foolish enough to believe in you?
Is it the ecstasy?Is it like a drug?
Seeing the other powerless?
I wish I knew how to hate you..
I wish I stopped hating everything else and let you go..
It feels that nothing is ever enough..nothing feels right..even if it seems right..it's not..
It feels that everything's  out of control...
Publicat de Unknown la 13:23 Niciun comentariu:

You just give me enough just to keep me alive..
Same words...different  character..
What is it that you want?
The thought that I am always going to be here..
Neglected ..unreversed..
Nothing's perfect..and enough..
This ain't love..maybe torture...
I feel stuck..not being able to move..not forward and not backwards..
Are you really worthy?
Same old..same old..
It's just consuming...
It just burns
You are just like an addiction..
The only thing that sets you free is the thing that causes you pain..
And you can't have them both..
Not anymore.
Publicat de Unknown la 13:56 Niciun comentariu: